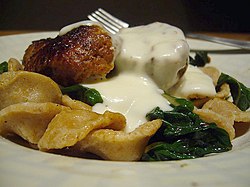 In cooking, a sauce is a liquid mixture added to another food for flavour. Sauces are not normally eaten by themselves; they add flavour, moisture, and visual appeal to another dish. Sauces are an essential element in cuisines all over the world.

The main sauces of French cuisine are built on a basis of roux, which is just flour and the liquid part of butter. Examples from Italian cuisine are the cream and ham sauce called carbonara; the ground meat sauce called bolognese, and the herbs and garlic sauce called pesto.

Bottled sauces can be poured over food when it is served. An example would be the tomato-based sauce that is usually poured over spaghetti. Gravy is a brown sauce served with meat.

Sauce is a French word taken from the Latin salsus, meaning salted. Possibly the oldest sauce recorded is garum, the fish sauce used by the Romans.

Sauces need a liquid component, but some sauces (for example, pico de gallo salsa or chutney) may contain more solid elements than liquid.

Sauces may be used for savoury dishes or for desserts. They can be prepared and served cold, like mayonnaise, prepared cold but served lukewarm like pesto, or can be cooked like bechamel and served warm or again cooked and served cold like apple sauce.